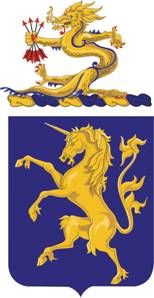 Working a future post on my knoxville1863 blog I was tickled to find out that Brig. Gen. William P. Sanders, for whom Knoxville’s Fort Sanders was named, was a veteran of the 6th U.S. Cavalry Regiment in the Virginia Peninsula Campaign and at Antietam/Sharpsburg.

I was a lieutenant-platoon commander in the 6th’s descendant unit, the 6th Armored Cavalry Regiment at Fort Meade, Maryland, in 1968-69.

We were then rumored to be headed to Vietnam to replace the 11th Armored Cavalry Regiment, though, in fact, most of our troops were combat veteran returnees at a time when a one-year combat tour was all that was required.

Instead, we spent most of our time training for riot control in those days of race riots, though we didn’t have to control any. Instead we guarded President Nixon’s inaugural ceremonies. The unicorn is the 6th’s shoulder patch and coat of arms.