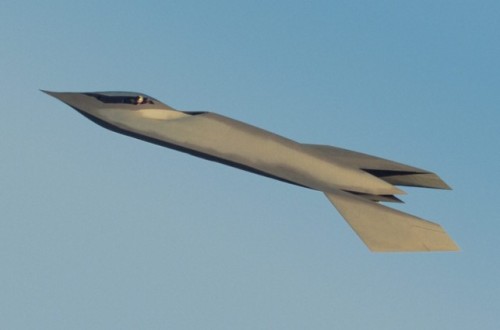 Amazing what can be done with computer-control and composites, such as this flying prototype fighter-bomber supposedly adapted from Star Trek’s Klingon “bird of prey.” It reportedly flew 40 times in the late 1990s as a demonstrator and now is on display at the USAF museum in Dayton, Ohio.

Posted in Science/Engineering, War Without End

The trouble with Star Trek

Posted on October 14, 2009 | Comments Off on The trouble with Star Trek

Science fiction writer Charles Stross ruined his Merchant Princes series for me with its explicit anti-Bush politics, but I agree with him about Star Trek. I liked it when it was new in the 60s, even retained some interest in it in the 80s. Now I see it’s as bad as the old Edgar Rice Burroughs’ tales of Mars.

That’s because, as CS says, ST merely pastes the sci and tech on top of its storyline, whereas good scifi builds the storyline out of plausible sci and tech which informs the story’s world. Now if he’d just forgone using his fiction for his personal political propaganda, I’d still be looking forward to his books.

Comments Off on The trouble with Star Trek

Okay, Star Trek fans, here’s one for ya. I don’t know if this will ever make sense, but it’s pretty to look at.

Comments Off on Dry dock in orbit

Posted on February 20, 2009 | Comments Off on Educational television

Via Treppenwitz. More of these funnies here. Also this one.

Comments Off on Educational television

I can’t look at a picture of Voyager 1 without recalling V ger of the Star Trek episode which made a less than satisfying movie. V ger or Voyager, the farthest traveling human-made object in the cosmos (as far as we know), is still sending news as it traverses the outer edge of the gas bubble we live in, about 10 billion miles away. Some people can’t get excited about this stuff. They don’t realize they’re living in a bubble of gas.