Posted on June 22, 2015 | Comments Off on My great grandfather and great grandmother

Sort of a belated Father’s Day tribute. Edward P. & Mary Lenora Stanley in a copy of a tintype photo taken about 1870. He was a circuit-riding Methodist minister and farmer who’d lost a leg in the May, 1864, Battle of the Wilderness as a private in the Minutemen of Attala, a company in the 13th Mississippi Infantry Regiment—the founding regiment of the famous Barksdale’s Mississippi Brigade.

Of slow blogging and Lord Shiva

Mr. Goon complained the other day in a private email that I seem to be slow blogging lately. True.

Reason being I’m formatting, proofreading and indexing my next book, for the second time (don’t ask), a 336-page history of my great grandfather’s 13th Mississippi Volunteer Infantry Regiment—mostly taken from my blog about it but with some new material. Trying to get it done and for sale at Amazon before Halloween.

Meanwhile, I’ll mention a recent post I read at Althouse, a favorite blog, on the American Indians complaining about the Cleveland Indians name and logo, not to mention the Washington Redskins. Commenters there (so many of them, whew) caught my interest, as usual.

One: The “Redskins should keep their nickname…but change their logo to a [new] potato.” Ha. No offense to Redskins QB RGIII, a fav of Baylor fans and other Texans who watch football.

Another: “I accept the Fighting Irish and the drunken Leprechaun logo, so I am free to tell (the Indians) to piss off.”

Best: “Truly, it seems like half the people in this country spend all day looking for some way to be a victim.”

My own take: Given all the immigrant Indians from India (and the relative paucity of American Indians) the Cleveland Indians ought to keep their name but change their logo to Lord Shiva, the Destroyer. Much more relevant nowadays.

Is that racist? Tough.

Posted on July 10, 2013 | Comments Off on A Rebel soldier’s message to President Lincoln

Rocky Lockley, a reader of my Civil War blog about my great grandfather’s 13th Mississippi Infantry Regiment, emails with a photo of an extraordinary find.

He and a friend recently dug up this old bullet when they were relic hunting near known Civil War camps in the vicinity of Brucetown, northeast of Winchester, Virginia. The 13th Regiment camped there in October, 1862, after the Battle of Sharpsburg (Antietam).  Lockley explains:

“An Enfield bullet was recovered that at first glance seemed just like all the others except it had its nose cut down to be more like a snub-nose. When this bullet was being cleaned up with water and a toothbrush the engraved letters started coming out.

“After calming down a little [Lockley saw that] the letters formed a name and a message. G.M. Mott was carved from bottom to top on one side and “To Old Abe” was carved on the other!! After searching the internet for less than 5 minutes I had a hit that showed George M. Mott, Company E [The Alamutcha Infantry], 13th Mississippi, had been a part of the entire war.”

After more research, Lockley found a photo of Mott’s tombstone, showing that he was a medical doctor when he died in 1906 in Sabine Parish, Louisiana.

Independent historian H. Grady Howell’s muster listing for the 13th shows Mott entered the war as a private and had been promoted 2nd sergeant when Lee’s Army, of which the 13th had been a part, surrendered in 1865.

Independent historian Jess McLean, author of the only compendium of the men who served in the regiment, found that Mott was a 21-year-old student living near Marion, Mississippi, when he joined in the spring of 1861 as a sergeant. He apparently was later demoted to private before rising in rank again.

Mott is buried in Oak Grove Cemetery, two miles south of Converse, Louisiana, which is south of Shreveport.

Comments Off on A Rebel soldier’s message to President Lincoln

A Mississippian in Texas

Posted on April 14, 2013 | Comments Off on A Mississippian in Texas 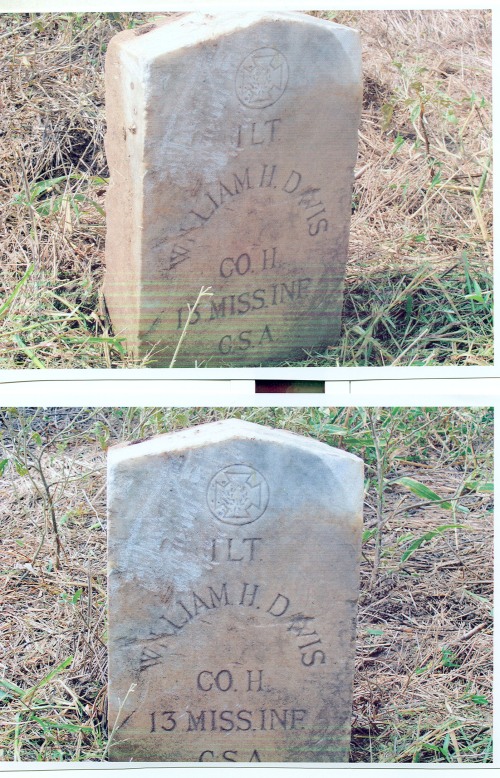 Jess McLean of Dallas, author of the only compendium of the troops of the 13th Mississippi Infantry Regiment (of whose unit I am finishing the first regimental history), is trying to preserve this old grave in Lyons, southwest of  College Station.

The lieutenant named on the tombstone, William H. Davis, began the war as a private in the 13th’s Spartan Band (later Company H) and had the doubtful distinction of being in command of the remnant of the regiment that surrendered at Appomattox in 1865.

Somehow 1LT Davis, who was from Chickasaw County, Mississippi, wound up buried on private property in Lyons, Texas. Jess still is trying to figure how that happened as well as trying to interest the SCV in protecting the grave with a fence. It needs one because the new landowner’s seasonal mowing has periodically scarred the stone and knocked it down

Comments Off on A Mississippian in Texas

Jo Anzalone, who is descended from a 13th Mississippi Infantry Regiment soldier, took a trip not long ago retracing the unit’s wartime movements.

She carried with her an antique silver syrup pitcher belonging to her Civil War ancestor, Private Jonathan James McDaniel, and posed it at different sites.

Here, the pitcher sits on the business end of a 20-pounder Parrott gun, a rifled cannon used mainly by the Union,  near the Henry House on the Manassas Battlefield in Virginia.

Jo has written a novel about McDaniel, available for free reading here. My own blog saga of the 13th Regiment continues into late July, 1863, here.

Comments Off on Syrup cannon

Lovely old (very old) photo of the Monitor taken sometime after its fight with the Merrimack/Virginia in Hampton Roads in 1862. Latest photo at my new book blog, Knoxville 1863, which is coming along slowly. Moving a bit faster is my other new blog 13th Mississippi Infantry Regiment, focused on the historical artifacts and new interpretations of my great grandfather’s old outfit. Lots of work, three blogs, but lots of fun, too.

Comments Off on U.S.S. Monitor

All that remains of Fort Sanders

Posted on July 16, 2010 | Comments Off on All that remains of Fort Sanders

Just a historical marker two blocks south of the military crest of the ridge. I posted this on the novel’s Web site as well. Will post it here also to give the novel site a little boost. It is not yet attracting as many hits as the 13th MS one, which is understandable I suppose. The MS brigade was famous and still is among the war’s buffs. Fort Sanders was, at best, obscure. Forgotten is even more accurate. That was my gamble novelizing it, but also my opportunity.

Comments Off on All that remains of Fort Sanders