A poem by Yehuda Amichai on my favorite city in all the world:

Jerusalem is low, crouching between her mountains,

Two thousand years ago, she crouched

In a wonderful lunge.

All other cities ran great

Circles in the arena of time, won or lost,

And died. Jerusalem remained in a lunge:

All victories are taut and concealed in her. All defeats.

Her strength grows and her breath is calm

For a race even outside the arena.

Via Jewish Review of Books

Posted on January 15, 2015 | Comments Off on Jerusalem’s Eliyahu Hanavi Synagogue 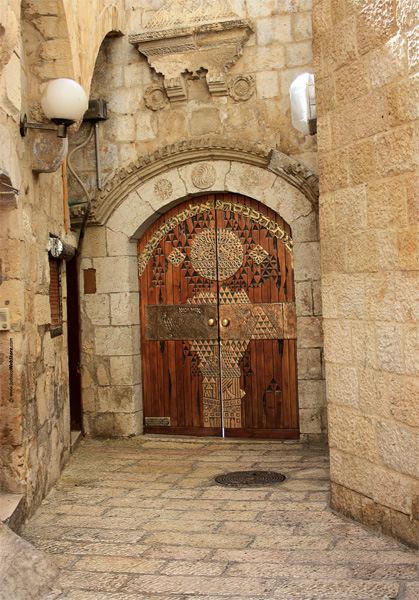 One good example of why the Worm’s aim of Israel’s withdrawal to the pre-1967 lines will never happen. From 1948 to 1967 the Jordanians controlled this part of the old city. The intolerant Muslims desecrated the circa 17th century Eliyahu Hanavi (Elijah the Prophet) synagogue and used it as a horse stable. Since 1967 it has been restored to its former beauty.

Those three loud votes no

Posted on September 15, 2012 | Comments Off on Those three loud votes no

It fit with the longtime anti-Christian and anti-Israel narrative of their Hollywood and news media pals when a sizable number of Dems tried three times last week to shout down restoration of the words god and Jerusalem to their party platform. But it still shocked me. Why had they been deleted in the first place?

“The cultural divide in the United States is now almost absolute; Democratic Party liberalism, which once embraced devout Catholics and observant Jews, cannot conceal its contempt for religion.”

But the no votes also concerned recognizing Jerusalem as Israel’s capital, something some Arab-American Democrats (and surely many non-Arab American delegates, judging from the volume) vigorously opposed. Which bothered PJMedia’s Roger L. Simon more than a little:

“A sizable and serious claque on the Democratic National Convention floor was shouting and applauding against the Jews.”

If Goldman saw it that way, he didn’t mention it. But the video, whose maker focused on two Arab-American delegates, could be so interpreted.

So the line between the two political parties has been drawn sharper than ever. No longer just over abortion or gay marriage or more welfare and higher taxes vs social conservatism, free enterprise and individualism.

But now over Israel and religion. And we’ll see if the Democrats have correctly interpreted the American mood or put their heads in a noose.

And, oh, by the way, if you think the post-convention polls showing Obozo ahead by 2-3-4 percentage points are accurate, remember they similarly showed Carter ahead in September-October 1980—until Reagan trounced him by winning 44 states.

Comments Off on Those three loud votes no

I’m not sure what to make of the speech. As usual for one of his opuses, it was both too precise and too general. And, I’d be willing to bet money on this, it will have little affect beyond the anger it has generated among the pro-Israel folks. Not to mention Hamas.

He can’t impose his terms on the parties, even if the Congress would let him which it probably won’t. The Republicans because they disagree with him and the Democrats because they want all that liberal Jewish cash to keep flowing their way. Which it won’t if the donors fear Israel is endangered. Which it could be under the new policy terms of the speech.

Which is certainly just as well for the Israelis and those like me who wish them well. It continues to amaze me that otherwise rational politicians continue to pretend that the Palis, perpetually lying and intolerant phonies that they are, are actual “partners for peace” for anyone, let alone Israel. Even their name is a phony, a name they never called themselves before Israel was reborn. It’s the name the Roman Emperor Hadrian imposed on Judea many moons ago as an insult to the Jews who hated him for building statues of Jupiter on the Temple Mount. Hadrian renamed Judea Palestinia.

Fortunately, the Palis also shot themselves in the foot (as usual) when they decided not long ago to have a unity government of Hamas and the PA. And recently underscored their love of terrorists. The speech made it clear several times that without them agreeing on Israel’s right to exist and then demilitarizing (Give up their AKs? Give up their stone throwing? Fat chance) none of this 1967 lines business will pertain.

Then there’s the problem of Jerusalem. The “emotional” problem the speech called it. Not to mention the capital of Israel, home of the Knesset, etc. Give it up? Give up the Kotel for “peace” with the untrustworthy PA and Hamas? Don’t hold your breath.

And, finally and maybe foremost, there’s the little matter of the Jordan Valley.  Israel will never give it up, if only for the sake of the boys who died securing it. But there’s more. They will not put themselves back in the militarily-vulnerable position of 1949 no matter what any American  president demands. They aren’t insane.

UPDATE:  The speech is already being backpedaled by the speaker. No surprise. The wonder is that he has any chance at reelection at all. The advantage of being a tan man, apparently. Sure ain’t for brilliance.

Comments Off on Those 1967 lines 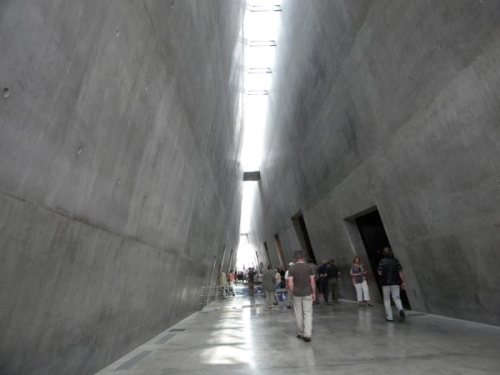 This is the main hall of Yad Vashem, the Holocaust museum in Jerusalem. Yes, the walls really do lean in that way, giving you the feeling of being trapped and about to be crushed. One is not supposed to take pictures there, but I wanted this one and so I did it secretly. Most of the exhibits are in the rooms off this disquieting hall.

Most of it I knew, having read a dozen survivor narratives over the years and taken a college history course on the Nazis in the 1960s before the teaching of history slid into its present relativistic swamp.

The pictures, the faces and names of the dead, were the emotional part of the exhibits for me. And the simple quotes, especially the short ones: “Today they came and took my only child away.”

For the first time, though, I got a real understanding of why there was not more resistance among the lambs driven to the slaughter: because the Nazis were very careful, right up until they turned on the gas, to make the people think that death was not the aim of it all.

No one getting off those freight cars at the extermination camps, however already grossly humiliated, could be sure what would happen to them and their families until it was too late.

Comments Off on Yad Vashem

A Plea to Hashem

Putting a prayer paper in the Western Wall, the Kotel, in Jerusalem.

It was for Russ Wheat, an old Army buddy in Texas, who wanted to memorialize the men of his platoon who were killed in action in Vietnam.

His request for me to do this while on my trip to Israel is interesting.

It underscores the fact that even non-Jews (Russ, who lives in Canyon Lake near San Antonio, is a church-going Methodist) still see religious significance in the Temple Mount.

Because of, at the least, the destroyed Herod’s Temple of the Jews.

(The photo is lopsided because the photographer was trying to be surreptitious about it. It was the sabbath and the Kotel-controlling Haredi (ultra-Orthodox) forbid photographs on the sabbath.)

And where do all these pieces of paper eventually wind up? See here.

Comments Off on A Plea to Hashem

Posted on March 31, 2010 | Comments Off on Obamalot’s Holocaust supporter

It’s bad enough, the double-standard Washington applies to Israel, always scolding them for “provoking” the Palestinians and not making enough “gestures,” such as releasing jailed terrorists. Never scolding the Pals for anything. Such as their rocket-launching from Gaza. Nada.

But the recent bashing for building apartments in northeast Jerusalem is just too much. Especially when you learn that one of Obamalot’s concerns is that they would be built on “the site of the Shepherd Hotel, the former home of the late Haj Amin Husseini, a former mufti, or Islamic law scholar,” according to the Washington Post.

Turns out Haj Amin Husseini was more than a “scholar.” He was a Nazi favorite who spent much of World War II in Berlin trying to convince Hitler and Eichmann to extend their Final Solution to the “Jewish problem,” i.e. the Holocaust, to the Middle East. Has Obamalot no shame? Apparently not.

Comments Off on Obamalot’s Holocaust supporter