Texas Sen. Ted Cruz and others are asking the FDA to clarify its opposition to HCQ as a Covid treatment for high-risk outpatients, and President Trump is joining in. Its widespread use in the non-Anglo world and the fact it’s cheap are arguments in its favor.

“Clearly, President Trump has not given up on the potential this drug combination may hold. Dr. Risch’s assessment is clear. For high-risk patients over 65 or with pre-existing conditions, the outpatient use of the hydroxychloroquine, zinc, and azithromycin combination has shown a significant reduction in hospitalizations and death rates.

“He asserts that we have let politics overrule science, and it is costing thousands of lives. Hopefully, senators pressuring the FDA will cause significant movement and clarity. The FDA owes its response by the end of business tomorrow. If the misinformation can be effectively cleared up, it will be a game-changer. The senators must continue to press the FDA and restore the doctor-patient relationship.”

Comments Off on HCQ game changer

“The Green New Deal is childish. It’s for children. It’s not for adults.”

Comments Off on Best Trump quote

Comments Off on Two Years of Fake News

Keeping the Dims in line 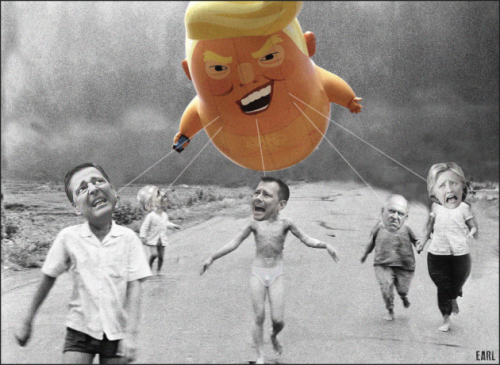 Via Earl of Taint

Comments Off on Keeping the Dims in line

I’ve always liked Orrin Hatch, even when I disagreed with him. He’s good on Trump, the first Republican president since Reagan who fights back against the Dims and their lapdog news media:

Comments Off on Hatch on Trump

The Rotisserie of Justice

Unveiling the secrets behind Spygate, says commenter Alan Veenstra at WSJ, will come about in Trump’s own good time:

“I am comfortable with Trump holding back on his authority to release the pertinent documents. He has repeatedly proven that his political (and theatrical) instincts are superior to those who seek immediate gratification.

“Let the rotisserie of justice turn at its own speed, slow roasting those on the spit. The entre’ will be all the tastier and more satisfying. Trump can always force the release of docs if the swamp and the DIMS are successful in thwarting justice [for a while]. Relax and enjoy the ride. Trump has this under control.”

Via Kimberley A. Strassel at WSJ

UPDATE:  I’ve become suspicious of Trey Gowdy since his multiple “investigations” have all come up dry, particularly the one on Benghazi. But he makes sense here, if what he has been told was the truth. Which, knowing the sources, is a big if.

Best headlines are, as usual, from Breitbart: